Mask of Deception is the first Utawarerumono game to be released in English. While the second in a trilogy, it works just fine as a starting point, but other elements of the game don’t stand up so well in general.

The world of Utawarerumono is wonderful, with beautiful artwork, interesting character designs, and a whole load of lore to get lost in. Unfortunately, the story doesn’t live up to this unique world. The general plot is quite good, but is stretched very thin over hours of slice-of-life scenes distinctly lacking in humour or charm. When there are moments of action, they’re often generic and predictable or jump between serious and light-hearted to jarring effect.

The characters leave quite a lot to be desired too. Characters can make or break enjoying many games, but especially one where they’re as prominent as this, with many of the visual novel sections being menial chatter and everyday scenes. There weren’t any I vehemently disliked, but there weren’t any that really stuck out to me either. It’s nice to see every character get a bit of time in the spotlight, even if some feel like they’re mostly just there to bolster numbers. An abundance of slice-of-life scenes with an array of fairly cliché characters easily becomes a little draining though. 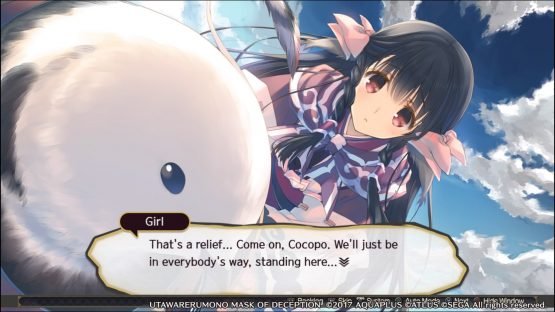 An abundance of slice-of-life scenes with an array of fairly cliché characters easily becomes a little draining.

More than the content itself, however, the game suffers from supremely slow pacing. I’m all for visual novels, and I love having moments to just focus on the relationships between the characters and learn more about them, but there were points where Mask of Deception became a chore to get through. It’s a shame, but the slow pacing really holds it back, and the reward of the peaks in the story isn’t enough to outweigh how long it takes to get to them.

Despite shortcomings in the story, the battles are fun, and the battle system is effective in its simplicity. The timing-based critical hit mechanic is a neat touch, and makes a change from relying on luck. You get a range of characters with different weapons and skills as you progress, and there’s a pretty good balance. None of the battles are too long or too difficult, but they’re not a walk in the park either, as enemies have substantial health bars and are just as prone to chaining critical hits on you as you are to them. 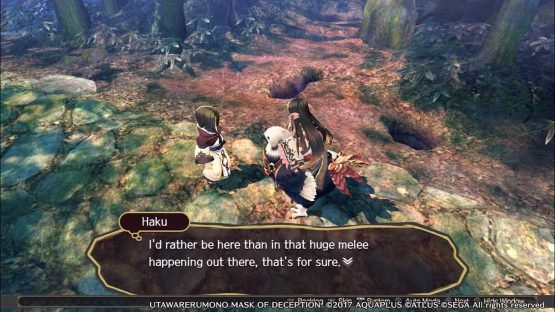 I would definitely rather be in that huge melee.

The battles are fun, and the battle system is effective in its simplicity.

Sadly, there are only 17 battles in the game’s lengthy main story, though a few are divided into multiple sections. It’s a shame there aren’t more, as they’re a nice break from the visual novel sections, but it’s also good to see each and every battle has a place in the story. A lack of random encounters means you’re always progressing the story when you go into a battle, and the battles never feel like a waste of time, even if some of them could easily have been avoided if the characters weren’t so prone to making stupid decisions.

While the battles primarily just require you to clear the map, the objectives do vary a little, particularly the defeat ones. Compulsory team members vary by the stage, as does whoever marks your defeat. It’s fun to switch things up a bit, and there are some battles where you can even leave the protagonist, Haku, behind — it’s a nice change of pace from games where the protagonist must always be in battle and it’s instantly game over if they die. Especially given that Haku isn’t all that strong to begin with, compared with other members of your party. That said, you can always take a smaller team to train up particular characters or make things more of a challenge for yourself too. 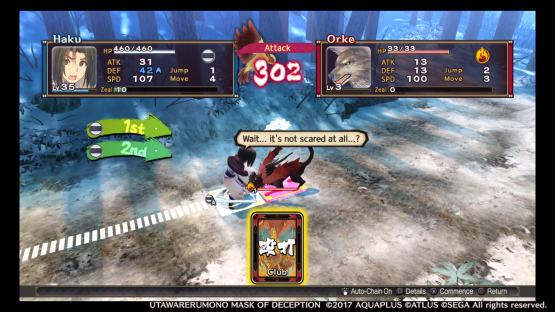 On the other hand, the 8 character limit on battles can be a little frustrating later on in the game, as you run the risk of suddenly being made to bring a character you haven’t been using with you and them being under-levelled. However, there is a Free Battle mode where you can redo previous battles to round out your team and avoid such a thing. There isn’t a huge number of characters on your team throughout Mask of Deception, so it’s pretty easy to switch people in and out depending on their use in particular battles anyway.

The battle system lends itself to this pretty well, with each character having an element that will put them at an advantage/disadvantage against other elements, and a variety of skills (and attack ranges) to take into count when you’re about to go into battle. There’s a great variety of skills you can equip to characters as you see fit, as well as the ones they’ll unlock as they level up, so it’s pretty easy to have a strong and well-rounded team. 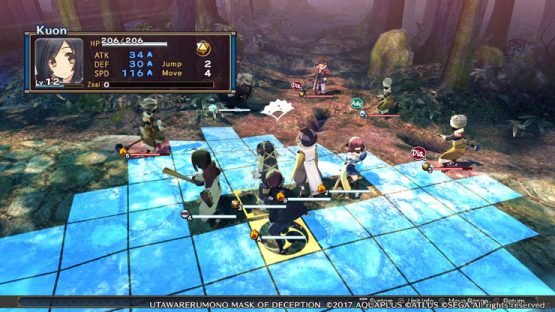 There’s a great variety of skills you can equip to characters as you see fit.

Between battles, you get a ‘base’ menu that lets you choose from a selection of scenes at different times and in different places. You’ll end up doing them all anyway, so it’s sort of pointless — sometimes there’s even only 1 option — but it means you’re not missing out on anything. That’s particularly good when where a scene takes place can have little to no indication of what or who it involves or how important it is. A downside to these sections, however, is that what this game does not need is more slice of life scenes, which is what these little tidbits primarily are. 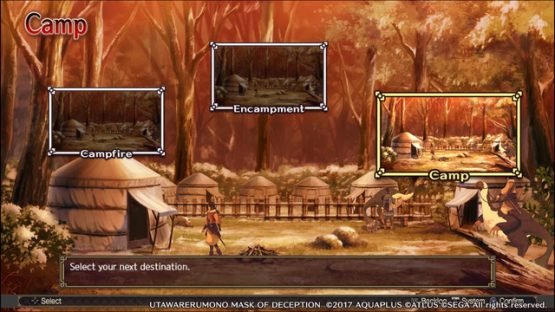 As you go about this selection of scenes in any order you wish (with the exception of ones unlocked by finishing others), there’s no sense of timeline or even time itself. I’d find myself thinking ‘has a lot of time passed for the characters without anything happening…or just for me?’ Still, even though there’s not much to it, picking between the scenes as you want does help break up a stream of events.

They were good moments to sit back and think about all of the (mostly trivial) things taking place at certain points in the story, and I started trying to use them to pull together the threads of subplots and get a sense of where they lay in the bigger picture: I’d find myself thinking ‘will this ‘Hallyway (night)’ scene tie into the other short and mysterious ones I’ve been getting? Is this ‘kitchen’ scene going to be a continuation of the weird accidentally-taking-the-capital-city-by-storm-with-experimental-desserts thing? Does this scene really take place some point after the one I just had or was it supposed to happen before it?’ I don’t think I’ve ever been quite so philosophical with a menu before, but I couldn’t quite get my head around why it was just…there.

I really can’t decide if I like this game or not, but I want to like it more than I do. The art’s really lovely, the soundtrack is pretty good, though it could do with a little more variation, the voice cast are really well-suited to their somewhat lacklustre characters. The story’s not terrible, and was mostly just getting started. 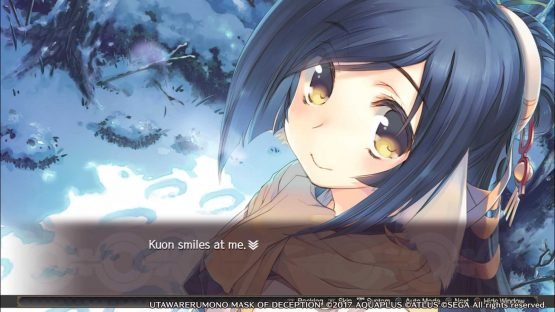 Having the upcoming sequel hanging over it doesn’t do Mask of Deception any favours.

With the war in full swing, there are going to be plenty more battles to come, and the pace and action are bound to ramp up a notch from here on out. But having the upcoming sequel hanging over it doesn’t do Mask of Deception any favours, as excessive scene setting and unanswered questions make it feel more like a lengthy introduction than a full game in its own right.

Sure, Mask of Truth is going to provide answers, but Mask of Deception failed to grab me enough to really make me care what they are. Even if the follow up turns out to be wonderful, getting through Mask of Deception is a task that could put many people off.