The latest issue of Famitsu has revealed an Utawarerumono remake! The original Utawarerumono will be coming to PS4 and PS Vita in Japan as Utawarerumono: Chiriyuku Mono e no Komoriuta in April next year!

The game will feature the following changes:

– All scenes are enhanced and in HD

– The opening movie is high-resolution

– A Special Extended Mode with enhanced music has been added

The Utawarerumono remake will be available in four editions:

– a Premium Edition for ¥9,800, including a soundtrack, a visual book, and an anime Blu-ray titled “Splendid Days of the Tuskuru Imperial Princess” which tells the story of a young Kuon.

Thanks to Ryokutya2089 for the details. 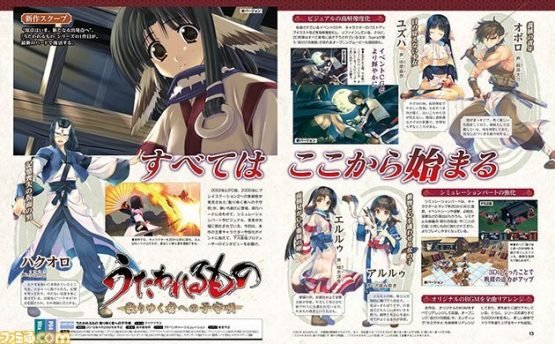 The original Utawarerumono has had various ports, but has yet to come west with any of them. Maybe this remake could finally bring it over! With Mask of Deception and Mask of Truth both out in the west this year already, it would be great to see the missing entry in the trilogy available too.