FLAT’s 2006 doujin game Killer Queen sadly does not come with much gunpowder or gelatin but instead an interesting take on battle royale-type visual novels. Perhaps one of the first few visual novels to take on the premise of the 1999 novel Battle Royale (though definitely not the last), Killer Queen explores two scenarios based around the core rules of killing people under certain conditions.

If you’re an avid player of games like 9 Doors, 9 Persons, 9 Hours or Danganronpa, this game needs little introduction. Killer Queen is essentially one of the first few forays into visual novels based on locking people up and giving them rules or excuses to kill one another. With this story, thirteen people are locked in a six-storey building and are issued PDAs which represent a unique playing card and carry an objective. If any person fails to fulfill their unique objective, the bomb strapped to their neck will explode, but when half the objectives require people to die, a bloodbath ensues. This game contains two episodes with varying scenarios involving the core cast, although it switches the main heroine in episode two. 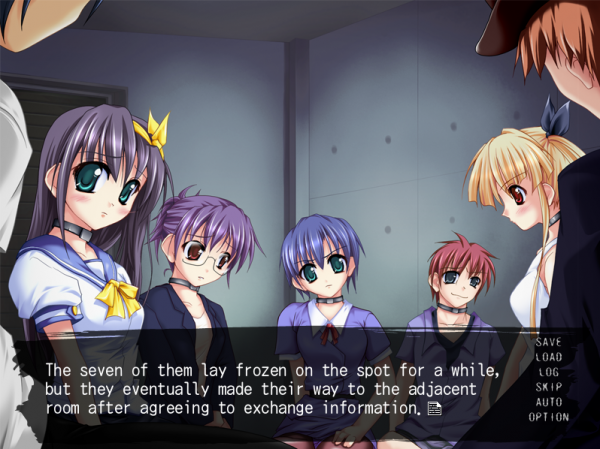 It seems a little important to say that Killer Queen, while like a bunch of visual novels in premise, has a different atmosphere and not quite the cast of characters you might be looking for. More than anything, it feels like the set-up and circumstances are more interesting than the characters themselves. This might be because Killer Queen’s protagonist Soichi’s motivations are more unique than “must save all” or “must be good”, or that other characters just don’t have much going for them. But it could also be because Killer Queen is actually a kinetic novel with no player input required at any point; something that is fine enough in other games, but comes off as lacking in this one.

Ultimately, Killer Queen is the kind of game you might be expecting it to be. It sides with a small portion of the cast who wants to escape without hurting anyone, then spends much of the game fleeing from murderous enemies and trying to play defensive. As the smaller group bonds in their efforts to work together, they play smart instead of losing themselves to insanity. There are some slightly sinister moments with the main group, but Killer Queen shows nothing incredibly new; the main characters opt out of most of the action through strategy, but when left to themselves, don’t have many interesting moments or character development. 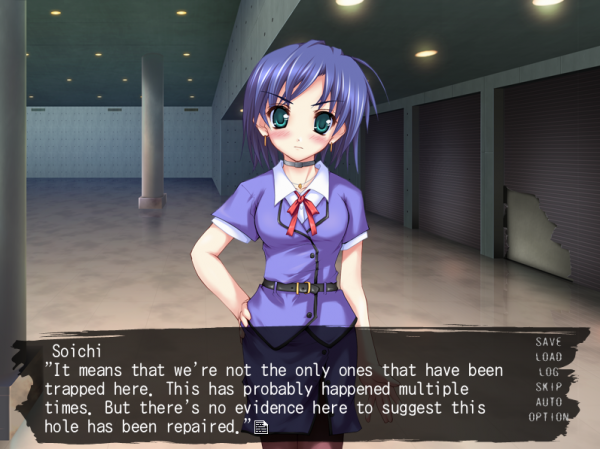 Of course, it’s still an interesting game even with the direction it takes. Rather than leaving what could be one hundred different stories up to the player, it follows two scenarios and delves into the mind of Soichi as he battles with people and his past. The few action scenes that are scattered through the game aren’t entirely predictable, and it’s a nice puzzle to try and figure out what everyone’s secret goals are. The game simply inspires a whole host of possibilities in the set-up, only to fall into something of a safe story where no choices restricts your imagination even further. If only VNs could explore everything ever…!

On a different note, Killer Queen has that doujin visual novel look you may have come to love, especially if you’re fond of Higurashi’s old art style. The game also boasts a full cast of voice actors, ranging from comfortable to… well, uncomfortable, in addition to a solid but repetitive soundtrack. In all, the game feels a lot more ‘indie’ created that a lot of doujin titles we see, which just may be in your strike zone if you’re into that. 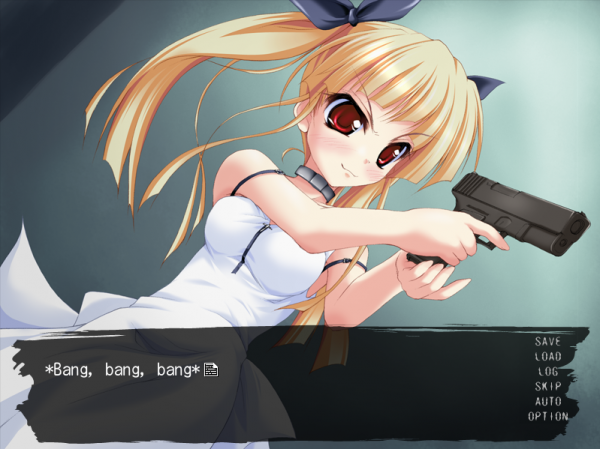 Killer Queen is an interesting kinetic novel that gives another look into battle royale-style situations with twists and turns that are a little to easy to see coming. While its two episodes explore different details, their path is ultimately the same, taking the defensive stance despite whatever death rules hang above the characters. In the end, Killer Queen is an incredible idea that seemed to take a safe direction and ended up a little boring. It’s worth a look into if you love the genre or want something with a little more ‘indie’ feel.

This spotlight took a look at Killer Queen Reprint. The original version of the game (with an older interface) can be bought from DLSite (18+) for $12. For those who have looked into it, this is again different from Secret Game: Killer Queen, the 2008 remake.