The original Yakuza games still hold up. Fire up the old PS2, and it’s surprising how the core and heart of the series has remained the same from its beginnings all the way here. Yakuza Kiwami uses series prequel Yakuza 0‘s engine and design to remake the first game in the series. But it’s a little bit more than just a remake.

The most marvellous thing about Yakuza Kiwami is how it manages to simultaneously feel like a loving remake of the original game, and also how it’s retrofitted to almost feel like a natural sequel to Yakuza 0. There’s a lot of amazing callbacks to that game, from a whole pocket racer substory, to Kiryu simply lamenting how he lost all of the casino money he earned in the 80s boom. 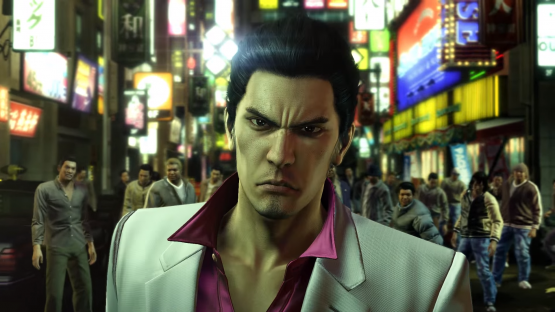 Starting in 1995, the game quickly skips ahead to 2005, the year of the game’s original release.

As it follows on from Yakuza 0, Kiryu starts the game with all the abilities he’d learned, only to lose them all after he spends 10 years in jail for a crime he didn’t commit, Castlevania style. It’s wonderful context that ties Yakuza 0 into the series’ overall story, and they feel like two halves of the same coin more than ever.

This is also where the “Majima Everywhere” system comes into play. Goro Majima is a rival to Kiryu who wants to beat him when he’s at his best to prove he is the better fighter. Naturally, when Kiryu is released from prison, Majima takes it on himself to help retrain Kiryu to become as good as he once was. Over the years, Majima has become a lot more goofy than when he was first introduced, and this is retrofitted into the first Yakuza by having him comically ambush Kiryu around the city, sometimes hiding in objects like bins, or in disguise. Over time he progressively becomes more and more difficult to beat, with more health and harder fighting styles. 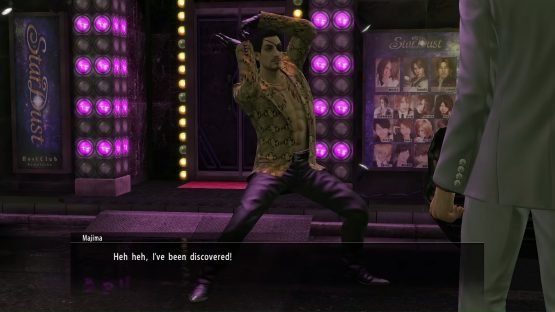 Somehow, fighting Majima and over and over never really gets boring.

Beating on Majima allows you to unlock more exclusive skills, and really rack up XP. By continuing to face off against Majima you’ll never feel like your hurting for experience points, and you’ll genuinely feel like you’re getting better at the game. Somehow, fighting him and over and over never really gets boring, because each encounter can feel quite different, and levelling up the “Majima Everywhere” gauge peppers this sidestory with special missions you’ll need to clear to get Majima to start randomly appearing again. At certain points it’ll cut off Majima Everywhere progression until you continue further in the story, during which Majima can be found taking a smoke break, and he’ll tell you he’s just thinking about life.

To some degree Majima Everywhere is at odds with the story of the original Yakuza. Goro Majima is one of the most menacing characters in that original Yakuza game, but here he’s just silly — his first scene seeming like a direct parody of the source material. But, ultimately, it feels like Majima Everywhere adds more than it takes away, and more often than not we gunned for Majima when we were near him (announced by the sound of Majima calling “Kiryu-chan!” after you unlock this ability), just to prove ourselves once again. 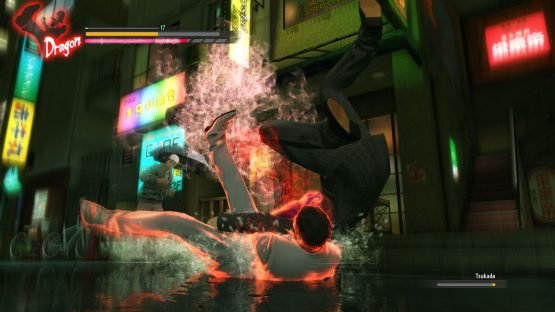 When powered up Dragon can be the most brutal fighting style. Let me introduce you to Mr. Concrete.

Kiwami also adds in some new story elements before the timeskip, which kind of feel like they get in the way of the pacing, but do pay off later on. On top of that, there are some new scenes inbetween chapters exploring what Nishiki (Kiryu’s best friend from his orphanage, and fellow Yakuza) was doing during Kiryu’s imprisonment. In this game he becomes something of an antagonist, and these extra scenes help ease that transition — driven home all the more if you have prior knowledge of him from Yakuza 0.

One karaoke song Kiryu’s sings remembers the good, rocking times, and is filled with shots of Kiryu and Nishiki bro’ing down from Yakuza 0, playing up that aspect. But so too is there a sad ballad where Kiryu is mourning a photograph of the pocket racer fighter too, so there’s that. 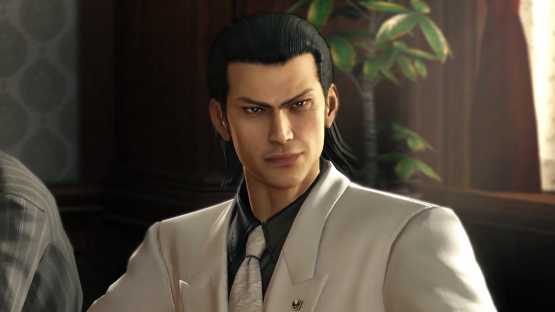 Mechanically, the game plays much like it always has. You run around an overworld city district after various story objectives, getting into fights along the way. These fights are fast, brutal, and over the top, quite often verging on comical. Kiryu is a legendary fighter, the Dragon of the Dojima Clan. He can easily take down packs of enemies, mixing up basic attacks, finishing blows, grabs, and throws — as well as picking up and using various objects.

Fighting fills up a heat gauge that unlocks more powerful moves the higher it gets, using up that metre when you pull them off. These heat actions range from attacks on downed enemies, to slamming a bicycle over their head. As you level up you’ll unlock more complex and situational moves, like counters and guard breaks. 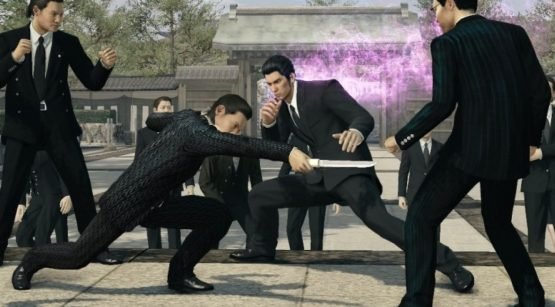 Can’t hit what isn’t there. Kiryu’s rush style can be very helpful at not getting hit.

Fighting styles do a lot to spice up the combat and breath fresh life into some sequences.

As with Yakuza 0, Kiryu has a range of fighting styles to pick from, and is able to switch between them on the fly after performing certain actions, leading to some devastating combos. Needless to say, these weren’t in the original game, and they do a lot to spice up the combat and breath fresh life into some sequences. Brawler is an all-rounder, with a lot of combos and options; Rush is quick, with longer weaker combos, the ability to dodge in succession, and weave out of the way of attacks, but no grab; and Beast gives you heavy, slow hits, and some devastating grab moves, as well as making Kiryu automatically pick up objects he’s next to when he attacks.

On top of this is Dragon, which only levels up with Majima Everywhere and some training from Komaki, a martial arts tutor you encounter later on — again, it’s an all rounder with some differently paced attacks, and some incredibly strong counters and heat moves. It feels lovely to have these options in the normal Yakuza missions, for instance unleashing the Beast in a bar crowded with furniture for you to crack over some skulls. 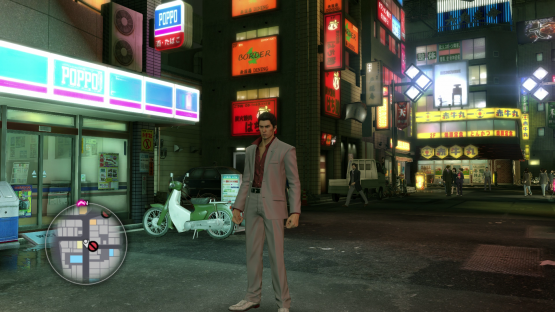 Kamurocho looks just as gorgeous as it did in 0, but a bit less glitzy and neon. It’s not the 80s anymore.

Kiwami does improve some of the weaker points of the original. For instance, the on rails shooting section is actually pretty fun this time around. But Kiwami’s worst parts are later in the game, where some of the original’s most annoying bits are still very annoying. For starters, some of the mission structure can be a bit gruelling from time to time, sending you running between areas on the map back and forth over again, though with the ability to unlock a “dash” move it does speed it up a bit.

If you aren’t putting up a fight, you won’t get heat, which means you can’t access the abilities that will help you out, and you’ll get in a rut.

But the worst parts are some of the unfun fight gauntlets and bosses. Such as one fight against 3 strong enemies with guns that dodge your attacks constantly; or heaps of enemies with unblockable attacks backed up by a slew of distant enemies with guns — these are the sort of areas that all but require you to be stacked up with the most powerful healing items money can by, which I thankfully was already wary of due to my time with the first game.

Some moves in Kiwami can help you deal with these situations, but with the way heat works it rewards momentum and punishes failure pretty significantly. If you aren’t putting up a fight, you won’t get heat, which means you can’t access the abilities that will help you out, and you’ll get in a rut. 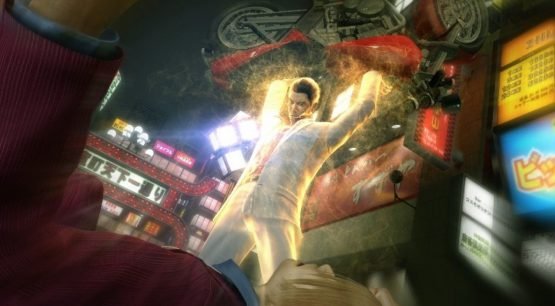 Some large weapons, like motorbikes, can only be used in Beast style.

The original Yakuza story is still one of the best. It’s a crime drama packed with intrigue and politics, and definitely makes you want to keep watching to find out what happens next. Even being already familiar with the original game, the terrific Japanese voice acting and cutscenes had me hooked. English language is not available, even though the original PS2 game is the only one in the series to have it — presumably because of the lower audio quality and the extra scenes and changes.

The original Yakuza story is still one of the best.

It’s a charming tale of Kazuma Kiryu, ex-Yakuza, unravelling the mystery behind a missing ten billion yen, and protecting a young girl, Harkua, who seems to be a piece of the puzzle. A piece his enemies will kill to get ahold of. Kiryu spends 10 years in jail at the very beginning, and it’s about him coming to terms with how the world has changed, and maintaining control of his life. In some ways Haruka is a beacon of what he’s lost over those years, and how things have moved on — both in him ageing and events moving past him. It’s just a fantastic story. 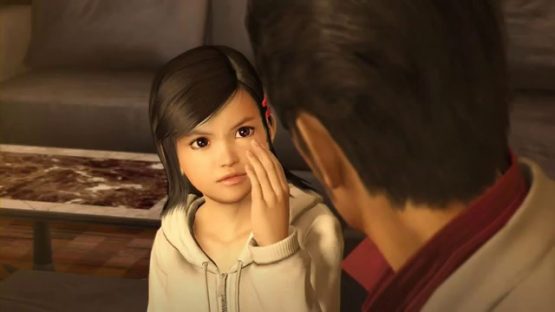 Some of the substories in Kiwami had me grinning ear to ear and cackling away.

Just as the main story is pretty serious, so too can Yakuza be absolutely absurd. It’s in how it manages to do both at once that makes Yakuza a truly special series. Few games can legitimately make me laugh out loud, but some of the substories in Kiwami had me grinning ear to ear and cackling away. Some of these are intact from the original game, but there’s a heap of brand new ones too. One about being “daddy” and “DILFs” was a highlight.

The story itself isn’t too long, but there’s so much more to discover and explore — and it’s all so hard to resist. Something will hook you, and keep you there for hours. Thanks to that, our first playthrough ended up taking about 30 hours. Pocket racing makes a return from Yakuza 0 with its own, new substory. Once you’re done, you can continue to explore the world with no new story to wrap everything up, or proceed to a new game plus. 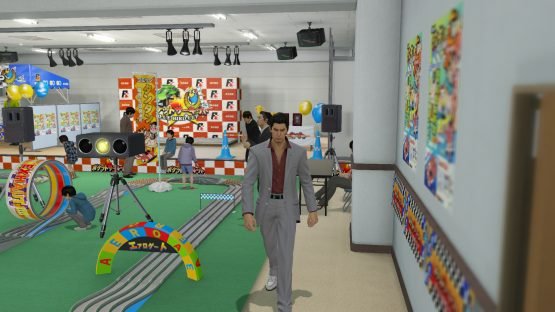 Prepare to dedicate your life to pocket racing.

The way Kiwami weaves itself into a symbiotic relationship with 0 enhances the pair as a sequential experience.

When Yakuza 0 came out I found myself struggling over whether to recommend newcomers start with that one, or the first Yakuza if they were open to going back to PS2. While I still love the original Yakuza, and Yakuza Kiwami, this game has confirmed to me that Yakuza 0 is probably the best choice. Not only is Yakuza 0 better, but the way Kiwami weaves itself into a symbiotic relationship with 0 enhances the pair as a sequential experience. Even though the original Yakuza might be a bit dated in places, Kiwami is still one that shouldn’t be missed. Now, bring on Yakuza 2 Kiwami.