Yomawari: Night Alone doesn’t beat around the bush. Even though at a glance it might appear cutesy it starts off with you walking a dog at night where a truck nearly kills you and in all the commotion your pet goes missing. Whatever was left of your dog is just a bloody trail now.

You head back home, where your sister decides to go out and look for Poro, your beloved friend and pet dog. After she also goes missing it’s up to the protagonist, a cute, young girl to explore desolate streets and find out what happened.

The town is brimming with all sorts of creepy creatures that can’t wait to get their tentacles on you. And most of them aren’t even visible with the naked eye. The only way to detect most of the danger is to use the flashlight that your sister left behind and scout every area. As soon you see a monster your only options are to quickly hide yourself in a nearby bush or just run away as fast as possible.

Hiding is effective, but the screen goes black when you are hidden. Thankfully, you have heartbeats and blurry visions as your guide on where the monsters are, so that you can sense when is the best time to flee. Monsters tend to patrol a specific area so this could be advantageous, although there were some that were very persistent even after a long wait. In most situations simply running away is your best bet, although your running speed and stamina are greatly reduced when there are monsters around. 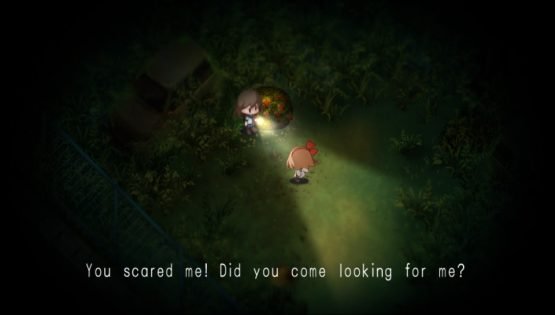 The game is intelligently narrated from the child’s perspective. Map is very much like a child’s drawing – it consists of crudely drawn locations and roads, which look like they have been painstakingly drawn by the heroine. She can collect various items, most of which are pretty useless, although this gives more of an impression you are playing as a little girl that collects every little trinket she finds. There is a constant supply of pebbles and coins throughout. Pebbles can be used to distract your enemies and coins will buy you a quick save at a shrine which acts as a checkpoint.

The game doesn’t really hold your hand, but it offers guidance in the form of short objectives. The game consists of chapters and each chapter should mostly be played out in a single sitting, because I found that turning off the game wipes away all your progress between the chapters. That’s why there are shrines everywhere so that you can offer a coin in exchange for a quick save. If you die, the game returns you to the last shrine you made your offer to and with all your items intact. You will die a lot, since enemies kill you in an instant. This is where shrines come in handy, so you can restart as much times as you need without losing your progress. 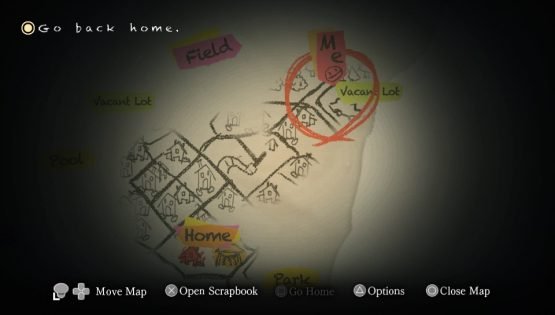 Yomawari rewards exploration and there is so much optional content and puzzles hidden away. And despite the game’s simplistic approach to horror, there are a lot of creepy random events and jump scares. It is easy to miss a lot of it if you just run through the game, but I recommend going slow and exploring everything. In one instance, I was walking down the street when a manhole opened revealing a hand that grabbed me and I couldn’t move for a bit. I went on unharmed, but was still very confused by the whole ordeal. And there is nothing creepier than ghosts and all kinds of apparitions patrolling the streets including some that look just like your missing dog.

The presentation is a bit different from what you might expect from this kind of a game, but you will find its isometric aesthetic quite pleasing. Similarly to Hotaru no Nikki, there is a certain grace with how cute and creepy blend so well together, creating a unique atmosphere of dread. All the characters and even some monsters look really cute. But that plays out quite nicely with the rest of its spooky aesthetic. You will feel vulnerable as you roam the gloomy streets of a small town as this little girl with just a bunny backpack on her back and no one to protect her. 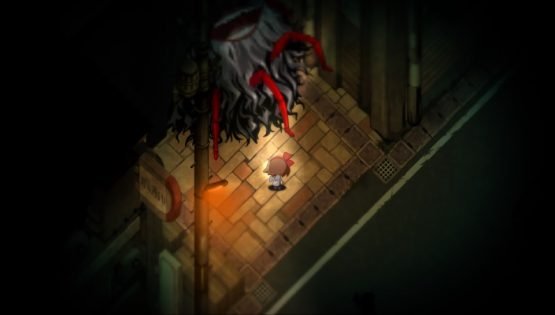 The game is unique in that there isn’t really any music, but that is compensated with its numerous sound effects: the buzzing of vending machines, the eerie siren of the upcoming train, your heartbeats and footsteps which are all done really well.

Yomawari may just be that little game you might want to pick up and play during the Halloween season, deeply buried in your cuddliest blanket and sipping a nice hot cup of tea. All this considering you are not too upset by the creepy atmosphere and disturbing stories, especially regarding our furry friends.

To All of Mankind Opening Movie and More Details Released

Labyrinth of Galleria: Coven of Dusk Revealed For July Release In Japan
Recommended Products from our Store: